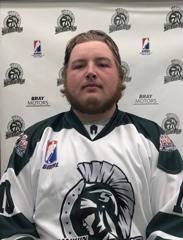 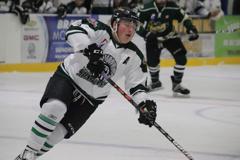 The Detroit Fighting Irish added some physical presence to their line up today as the team announced the signing of Veteran forward Wylie Nunn from Gaylord Mi. Nunn a power forward at 6"2" 225 lbs and a 2000 Birthdate played the last 3 years with the Alamaguin Spartans of the GMHL where he served as one of the team's captains. He is a 2018 graduate of Gaylord High School in Gaylor, MI.

Wylie brings experience, leadership and a physical presence to our line up and a reputation of being a tough customer o the ice. Being able to add a player like Wylie gives us the ability to create space in the corners and in front of the opponents net, however from scouting reports its Wylies shooting and ability to create in the open ice that really stands out in his play.

We ae very happy to be able to have Wylie become part of our roster he is a team guy and brings a reputation of being a guy whom will do anything for his team to get a victory  We believe that the experience he brings will be instrumental in mentoring our younger players whom are making the jump to Junior Hockey this year. Head Coach Dayid Taylor