Forward Ready to Play Juniors in the USPHL 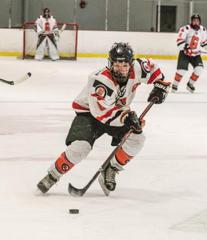 The Detroit Fighting Irish announced today the Brendan Miles has signed with the club for the 2020-2021 season.  Miles is a 2001 6'0" forward from Fenton Michigan and at 2020 graduate from Fenton High School.

Brendan is a hard hat guy that earned a reputation as a dangerous guy in the scoring zone.. Last season Miles tallied 35 points in 25 games with 15 goals and 20 helpers or the Fenton High School Lions. "Brendan knows how to lead both on the ice an off the ice"  he also served as team captain for his team last year. "We seen from the scouting reports and from his performance in camp that he knows how to compete I am looking forward to having him as part of our squad"  Coach David Taylor