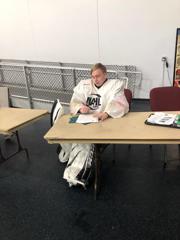 The Detroit Fighting Irish announced today that goaltender Caleb Swanson has signed with the team for the 2020-2021 season. Swanson is a 2002 Birthdate and hails from Mesa, Arizona. He played last season with the Yellowstone Quake of the NA3HL We are fortunate to have been able to acquire Caleb one of our scouts spotted him at a recent combine and he was a last minute add to our recent prospect camp stated GM Dan Vasquez.

I believe that adding Swanson to the goaltending will compliment returning goaltender Derek Antol Jr and will give  Coach Taylor  the confidence that they will have an opportunity to win no matter who is in between the pipes.stated Goaltending consultant Jacob Gorzelski/

Coach David Taylor remarked "Caleb showed us a work ethic that we are looking for and gives you the feeling that he is ready to make his mark. With that alone you can already say were a better team today then we were yesterday,

The Detroit Fighting Irish continue to hold open tryouts through out the month of August, The Team will conduct open Training Skates  Mondays and Wednesdays at 7:30 pm at Southgate Civic Ice Arena and they will hold a joint tryout camp with the New York Aviators on August 16th and 17th at Southgate Ice Arena to get more information you can go to the Detroit Fighting irish website