Camp Report: Day One in the Books 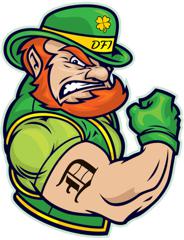 Day one Camp ReporL   Day one is in the books as the Detroit Fighting Irish Head Coach  David Taylor and staff were all smiles as the team's veterans and prospects were put through a full days of off ice and ice workouts.

TH day began with a brief orientation meeting in which the Irish brass said their normal welcomes and hellos and then it was split into two groups  with a goaltending evaluation session conducted by guest goaltending coach  Koby Kebbe and taam consultant Sam Shaheen. Veteran Goaltender Derek Antol Jr looked like he was ready to kick things off as he looked in mid season form performing each task and showing leadership to the half dozen prospect netminders whom were in attendance.

In the workout room Asst Coach Jeremy McNulty and GM Dan Vasquez conducted the off ice drills and wee very pleased at the results of the returning veterans.  We were very pleased that our players obviously have not just sat on the couch and played video game during this length time off and during this time of quarantine. Players Lane Stewart, Giuseppe Pizzo, Drew Wooten  amd Carter Schucklbeir came into camp ready to shed their rookie status and came ready to set examples  and they proved it on and off the ice today.

During the rest of the day the coaching staff and Shaheen took turns in conducting several on ice sessions putting the attendees thru a series of drills that included all of the elements of the game with an emphasis on skating, passing and communication. During the afternoon sessions the group were put through extended game situations.

We were very impressed at the high tempo level and the Hi spirits that our players brought today our key players such as Jay Kostecke, Oliver Allen and Clay Hightower skated at  a high level all day which definitely set a path for our new players and potential prospects to follow I am very excited to get training back underway  stated Head Coach David Taylor.

The Irish get back to work today  Camp begins at 10:00 Am with a off ice work out session and two on ice sessions. Players are welcome to walk in today