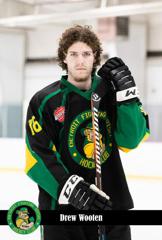 Forward Drew Wooten  will return to the Irish Line up for the 2020-2021 season.  Detroit Fighting Irish Head Coach Dave Taylor  confirmed that the 6/2" forward would be returning. Wooten's signing is  another key player that has chosen to return to continue building on the blocks that were set during the 2019-2020 season..

::I am excited to be returning to the Irish , I believe we have a great core of players whom are returning and feel that with all we learned about each-other and from our coaching staff that we are ready and prepared to enter this season not as a bunch of players looking to get their feet wet in the USPHL but will enter into the season knowing we have the ability as a team to come out on top every night." I can't wait to be part of that"

"Drew is one of those guys that reminds you why Junior Hockey can be more than just about hockey. Drew was a player whom last year that came to our organization not sure if he still belonged playing the game as the season progressed you could sense a new found enthusiasm and his need to be part of the game and worked night after night to make his presence felt he represent what every Coach wants and what every team needs  Great Attitude and Hard Work"  Head coach Dave Taylor